A Day In The Arboretum – Sebastian Sk. 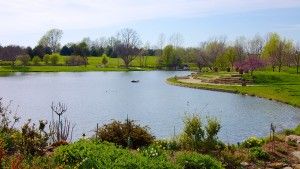 There was a man named Klemens, who lived in North America. On a sunny day, he decided to visit an arboretum close to where he lived. He was a novice artist who admired trees, and found this stopover to be a great opportunity to catch up on capturing the artistry of the woods on paint.

After reaching the acreage of colourful woodlands by bus, Klemens strolled to a lake surrounded by vegetation of various shades and began to establish his working area. He set up an easel with a sheet of canvas near the body of water, and prepared his oil paint mixes on a wooden palette.

After an hour, Klemens was half-finished with his work of art. He took a few steps back  from his easel and pondered upon it. His aim was to make an impressionist piece,  similar to the works of Claude Monet the nineteenth century artist (example to the right).

While Klemens was mulling over his artwork, a few people passing by noticed it and  commented on it. “That is an exquisitely good abstract art-piece,” one of them said with  a straight face. Part of Klemens’ pride was hurt by this, he hated abstract artists.

But Klemens soon returned to reality from expectation, and accepted that he wasn’t as excellent a painter as he thought he was. He thanked the commenter in a neutral manner, and then took a ramble around the arboretum as a rest from his craft.

While Klemens was taking a walk, he saw a man near a tree standing still with orange leaves held in one hand. Klemens asked for the purpose of his stillness, and he replied, “I am doing my own performance art, titled, ‚Civilization After The Plague’. I’m currently waiting for my colleague to take a picture of me.” Klemens nodded and told him to keep up the good work, but he turned away looking puzzled as the meaning eluded him.

When he returned to the lake to continue his unfinished piece, a hooded woman approached telling him of an artist who died at the exact same place. He asked for the cause of death, and she replied that the artist had made one too many strokes during painting. He had committed suicide.

After hearing this, Klemens was disturbed, but thanked the woman for the strange story. An hour later, he decided to return home. He took his failed impressionist painting, his equipment, and left while reflecting on the events of the day.